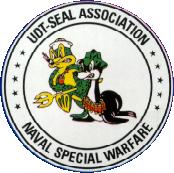 During the twenty year span of his career in the United States Navy, Jim Watson attended twenty-five training schools, spent eleven years as an active-duty SEAL, including one year as an Agency-sponsored advisor with the PRU (Provincial Reconnaissance Unit), and served on eleven missions into Cambodia with the Vietnamese LDNN (Lien Doc Nguoi Nhai, Vietnamese SEAL counterparts trained by Americans).

His career has afforded him the opportunity to meet many people, which he shares in his Gallery and his pride in his Team Mates has lead him to ask for the creation of a Memorial Page for those who gave their lives.


Military training schools like Marine Escape and Evasion, which seemed undecided on whether to beat you or starve you, helped forge the toughness and improvisational skills required by Navy SEALs. Jim Watson has worked with the finest, both as student and later as educator.
Watson has authored two books Point Man and Walking Point, both published by William Morrow and Company, and also co-produced Ambush!, a video tape of SEAL combat tactics in Vietnam for the exclusive L.O.T.I. Group Production Company. He also delivers motivational seminars defining the value of teamwork and projects status.

Purchase yours now at:
Gerber Knives